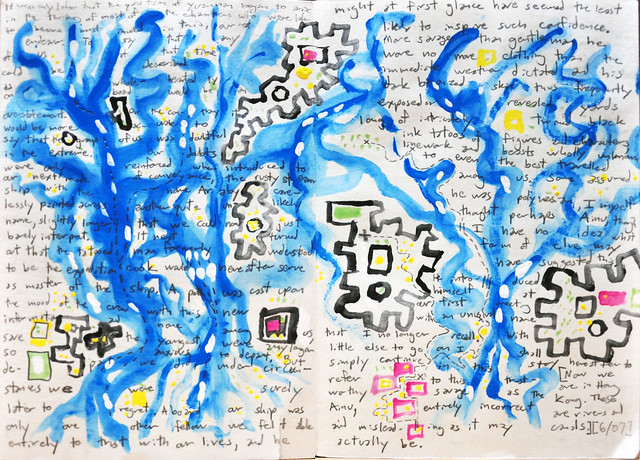 It was only later that the question of Yunnan began to arise in the thinking of most of the characters who were later to become most involved in this, our next endeavor. To say that any of us at that time could be described as whole heartedly on board would be an overstatement. On the contrary it would be more accurate to say that the group of us was doubtful is the extreme. Our doubts were only reinforced when introduced to our next mode of conveyance, the rusty steam ship with the name Araby carelessly painted across another quite unlikely name, slightly longer, that we could now just barely interpret. It next turned out that the tattooed man formerly understood to be the expedition cook would hereafter serve as master of the ship. A pall was cast upon the mood of the crew with this new information and none among us, save the youngest, were any longer so anxious to depart. But depart we did, under circumstances we were surely later to regret. Aboard our ship was only one other fellow we felt able entirely to trust with our lives, and he might at first glance have seemed the least likely to inspire such confidence. More savage than gentleman he wore no more clothing than the immediate weather dictated and his dark braised skin thus frequently exposed or revealed yards long of intricately twined black ink tattoos of figures and characters, to even the best traveled among us. Some assumed he was Polynesian, I myself thought perhaps Ainu, though I have no idea what form of clue may have suggested this. He introduced himself at our first meeting with an unusual name that I no longer recall. With little else to go on I shall simply continue in this story here after to refer to this trustworthy savage as The Ainu, entirely incorrect and misleading as it may actually be.

It was the garden that made the voyage so extraordinary. We encountered here all manner of plants hitherto unknown to the majority of travelers in our group and much was made of this each evening at the dinner table. I spoke little on these occasions, both because I had little knowledge to share, and because the supercilious lack of deeper inquiry disappointed my previous high estimation of so many of my colleagues. In any case I soon found it all rather tedious. or for that matter yet born on the date of her first marriage) but she was one of the most graceful and elegant women I had ever met so I guess I let my imagination run away from me a little bit when I realized she was taking note of me and watching me and asking around about me in town (word travels far via the coconut wireless) so I'd been having this little internal conversation and moral struggle about what I would actually do if she tried to put the moves on me one day (I'm actually not sure if that is a moral or ethical struggle and I must admit that I've never considered myself to be especially adept at distinguishing the finer points of either ethics or morality or the difference between them). So when I finally was invited to her table that day at the club I had only in my mind rehearsed the different ways I might respond if she put her hand on my thigh under the table (though I hadn't settled on a single response) and I was for this reason utterly unprepared for the conversation that was about to change the course of my future.

"No, you're right. I have no formal training as a chef, and the only time I was ever hired to cook anything I was 17 years old and got a job at A+W and then I got fired from my job flipping burgers after only a couple of months, so I guess you might say that while I do like to cook I am in no way a chef [I always talk more than I mean to when I am nervous]."

"No need to get defensive," she laughed. "You misunderstand me. I think you are a chef in the sense that you love and care about food in all stages of its selection, preparation , and presentation. That's what I consider a chef."

"Yes, you are right - I Mean I agree with your definition of what makes someone a chef, up to a point - but one must add the quality of being good at those skills you mention, one must have a certain spark, or flair, or intuition or something, that provides the creative input in preparing a meal and takes it to a higher plane, beyond cooking". [still nervous, still verbose]

"Are you describing yourself?"

"I didn't mean to but I guess maybe I was sort of. Sorry if that sounded immodest."

"I already knew that about you."

"That I am immodest?"

"No, that you have a talent related to food that has not yet been fully realized within yourself or though your opportunities."

"You seem to know a lot about me."

I felt a high level of unease, realizing I was being scrutinized and appraised but not in the way I had expected. What had I been thinking? Vanity kills.

[At this point a rather large man appeared from the kitchen door , not dressed at all like the kitchen help. I would have described him as Chinese, though I cannot say why, since the alley was black and moonless, without any electric lamps. It appeared that he was familiar with his surroundings, turned abruptly toward the northern gate making less noise than I would have expected from such a partly presence. A distinct scent of orange fruit disappeared silently into the northern wind, stronger that evening than I have before encountered in these environs. The scent of orange elicited a swift recollection of having encountered this sensation before, perhaps in Tokyo, yet inexplicably I found my mind leaping to the snow of Alaska. This made no sense at all to me at the time, and I  immediately sought to drive away this mental distraction and return at once to more logical and local indicators. Nobody would be in this hour departing through this alley unless in some way engaged in a culinary profession, or else seeking to leave the area unseen by the larger majority of visitors to the larger street from when the alley led. Had the portly man left by the better lit street to the south he would have encountered many people in brighter light and would surely have been recognized by anyone who might have known him or encountered him before. Knowing only that I was setting out north into an unknown part of the city, I followed.]