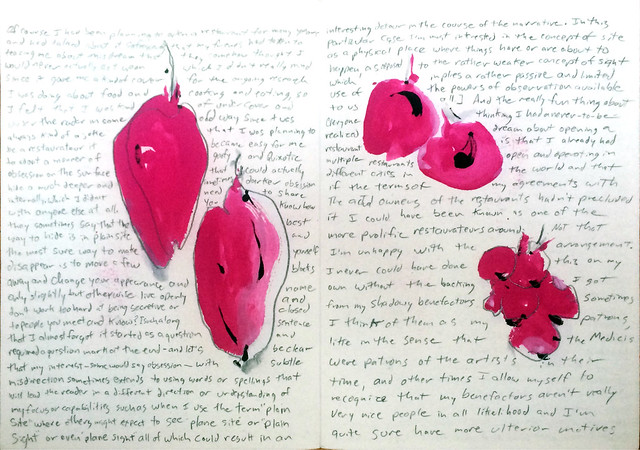 Of course I had been planning to open a restaurant for many years and had talked about it so frequently that my friends had taken to teasing me about this dream that they somehow thought I would never actually act upon. Which I didn't really mind since it gave me a kind of cover for the ongoing research I was doing about food and cooking and eating, so I felt that I was kind of undercover and under the radar in some odd way. Since it was always kind of a joke that I was planning to be a restaurateur it became easy for me to adopt a manner of goofy and Quixotic obsession on the surface that could actually hide a much deeper and sometimes darker obsession internally, which I didn't need to share with anyone else at all. You know how they sometimes say that the best way to hide is in plain site and the most sure way to make yourself disappear is to move a few blocks away and change your appearance and name only slightly but otherwise live openly and don't work too hard at being secretive or closed to people you meet and know? [Such a long sentence that I almost forgot it started as a question and required a question mark at the end - and let's be clear that my interest - some would say obsession - with subtle misdirection sometimes extends to using words or spellings that will lead the reader in a different direction or understanding of my focus or capabilities such as when I use the term "plain site" where others might expect to see "plane site" or "plain sight" or even "plane sight" all of which could result in an interesting detour in the course of the narrative. In this particular case I'm most interested in the concept of site as a physical place where things have or are about to happen as opposed to the rather weaker concept of sight which implies a rather passive and limited use of the powers of observation available to us all.] And the really fun thing about everyone thinking I had a never-to-be-realized dream about opening a restaurant is that I already had multiple restaurants open and operating in different cities in the world and that if the terms of my agreements with the actual owners of the restaurants hadn't precluded it, I could have been known as one of the more prolific restaurateurs around. Not that I'm unhappy with the arrangement. I never could have done this on my own without the backing I got from my shadowy benefactors. Sometimes I think of them as my patrons, like the sense that the Medici’s were patrons of the artists in their time, and other times I allow myself to recognize that my benefactors aren't really very nice people in all likelihood and I'm quite sure have more ulterior motives for their actions than I will ever understand, and in any case they are not primarily motivated by a love for the arts (culinary or otherwise) but rather are benefactors in service of naked

[The important gentleman was dying and had been for days, perhaps weeks. This was not the first time and I supposed we all, as well as the press, were quite familiar with the routine and possibly found it a reassuring stability in an otherwise unsettled world. As long as he remained dying the news cycle was predictable and the special segments familiar and productive of warmth and self-flattering memories. The difficult and awkward bits of the life, the jail time and the jailed and all us enablers recede behind the triumphant glow of accomplishment against all odds we had stacked up against him. Today he is only the godliest of currently living souls, the name of a street, and a universally welcome symbol of all the goodness our world has become. It will now be sad if he dies, not for the loss of a man, but sad for the loss of a universalized warmth and predictability. Who will replace him? It is sad in Mumbai that no matter how big the mango grows it always hangs under the branch. The good mango will grow and then drop. The evil brunch will hang above.]

ambition and lust for power and influence, which in fact brings them ever closer in my mind to the parallels with the Medici. So even though my primary contact with my benefactors is with a slippery character named Mr. X (when he told me to call him that I laughed and told him it sounded like a name of some villain from the middle years of the James Bond franchise and he seemed to be tickled pink, if the phrase can be used for a non-Caucasian, so I continued to address him that way when in his presence but I always refer to

[There was a strong scent of orange in the air and it was impossible to discern its origin. Many of the crew walked up and down the street and sniffing up the one-way alleys attempting to track it down. This was not the sort of artificial orange scent that you find in cheap candies or powdered power drinks that one sends to the moon. This was a wonderful orange scent as though extracted straight from the fruit. It began as a faint indication but late in the day it had blossomed into a smell wafting through every avenue in the city. That the city could offer such unexpected and mysterious pleasure and delight seemed not to have occurred to any of us previously and we were quick to take notes and discuss the phenomenon. As our study progressed we lost interest in the origin and begun to focus entirely on each nuance as it became apparent to us. Most interestingly it appeared that the orange smell was not undifferentiated and pervasive but it varied in density and intensity, forming volumes and

him in my diary notes and think of him as Piero one of the less fortunate and notable of the Medici). My own first contact with the Modern Chinese Medici (take note that if I ever decide to recast my life story as a comic opera in the style of Gilbert and Sullivan I might be able to make good use of this line in a song or two) was through a chance encounter I had with the father of Mr. X / Piero who I was introduced to in a tiki bar near Honolulu by a mutual friend close to twenty years ago now. He was the very elegant older Chinese man sitting in the back booth with Annette, the Septuagenarian proprietress of the establishment who had been pointed out to me several times as someone I simply had to meet but never had until that day when the guy who was doing some repairs on my boat took me over to her and I was asked to sit at the booth with Annette and this man. And while I was introduced by name to Annette (and she always was very friendly to me and increasingly confided in me until her eventual death in 2008) I was never officially introduced to the man she was with, at least in the sense of being told his name (real or assumed) so I have always referred to him as Papa X (when speaking with his son) or as Cosimo (father of Piero Medici) un my own mind and notes. This chance meeting that day led initially to me doing a small favor for Papa X, by letting him use my boat for a brief excursion from the Harbor on the following day. Or more precisely I allowed my boat repair guy Mike to take the boat out for a test run to see how it was running after he adjusted the values and when I said I would go along he asked if it was okay if I didn't

and drifts drawn through the streets in vacuums and drafts preceding and following the rhythm of traffic and pedestrian paths, dancing in Tai Chi and other actions and motions previously less significant in our thoughts on the shape of our city. Reorganizing these new shapes of smell as significant volumes in space we began to map our discoveries and plot their densities and characteristics in time and space.]

because while he tested my boat he was going to drop a friend off somewhere offshore and this friend made him promise not to take anyone with him or let anyone know where they went. But I did happen to see Annette down on the dock near Leko (the name of my boat) and I could see even from the distance that she was crying and waving goodbye to my boat as it pulled out with Mike at the helm on the fly bridge but Annette was looking into the darkened windows of the cabin and although I couldn't see who was there I absolutely know for sure that it was Papa X / Cosimo on board. I never saw him again (in Hawaii) and for that matter I never saw Mike again (in Hawaii) but Leko was back in its slip the next morning all tied up very neatly with the ropes coiled and the keys in the ignition. I know it wasn't Mike who brought the boat back. The engines were still warm and there were 17 hours on the engines that had accumulated since the day before (yes I checked the hour gauges before I let Mike take it out) so I know that Leko had been out all night somewhere. None of the other dock denizens had seen Leko come back and the fuel dock boys hadn't seen her either which was really strange because both tanks were almost full of diesel and I know she was below 1/4 full the day before. Getting almost 400 gallons of free fuel was a big windfall to me especially at that time and I considered myself to be pretty lucky to trade use of my boat for one day for that kind of a return, but I didn't realize until later that this was to be just the first on a long line of such apparent windfalls or unexpected benefits that would inexorably and inextricably start to bind me more and more into the favors and obligations of the Medici clan. When I asked Annette where Mike had gone she said she had no idea but could assure me he was in "a better place" which I at first thought was a kind of euphemism warning that I shouldn't ask any more questions or I might end up in a better place myself. Which in fact is what happened, as I next saw Mike in China riding high running a fancy bar on the Bund.